The slide started with bad economic news from Germany and China, which triggered a flight to the relative safety of U.S. Treasury securities. High demand briefly pushed the yield on the benchmark 10-year Treasury note below the two-year note for the first time since 2007.2 This is referred to as a yield curve inversion, which has been a reliable predictor of past recessions. The short-lived inversion spooked the stock market, which recovered only to see the curve begin a series of inversions a week later.3

From short to long

Yield relates to the return on capital invested in a bond. When prices rise due to increased demand, yields fall and vice versa. The yield curve is a graph with the daily yields of U.S. Treasury securities plotted by maturity. The slope of the curve represents the difference between yields on short-dated bonds and long-dated bonds. Normally, it curves upward as investors demand higher yields to compensate for the risk of lending money over a longer period. This suggests that investors expect stronger growth in the future, with the prospect of rising inflation and higher interest rates.

The curve flattens when the rates converge because investors are willing to accept lower rates to keep their money invested in Treasuries for longer terms. A flat yield curve suggests that inflation and interest rates are expected to stay low for an extended period of time, signaling economic weakness.

Parts of the curve started inverting in late 2018, so the recent inversions were not completely unexpected. However, investors tend to focus on the spread between the broadly traded two-year and 10-year notes.4 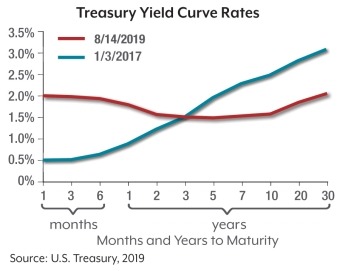 Inversion as an indicator

An inversion of the two-year and 10-year notes has occurred before each recession over the past 50 years, with only one "false positive" in that time. It does not indicate timing or severity but has reliably predicted a recession within the next one to two years. A recent Federal Reserve study suggested that an inversion of the three-month and 10-year Treasuries — which occurred in March and May 2019 — is an even more reliable indicator, predicting a recession in about 12 months.5

Is it different this time?

Some analysts believe that the yield curve may no longer be a reliable indicator due to the Federal Reserve's unprecedented balance sheet of Treasury securities — originally built to increase the money supply as an antidote to the Great Recession. Although the Fed has trimmed the balance sheet, it continues to buy bonds in large quantities to replace maturing securities. This reduces the supply of Treasuries and increases pressure on yields when demand rises, as it has in recent months.6

At the same time, the Fed has consistently raised its benchmark federal funds rate over the last three years in response to a stronger U.S. economy, while other central banks have kept their policy rates near or below zero in an effort to stimulate their sluggish economies. This has raised yields on short-term Treasuries, which are more directly affected by the funds rate, while increasing global demand for longer-term Treasuries. Even at lower rates, U.S. Treasuries offer relatively safe yields that cannot be obtained elsewhere.7

The Fed lowered the federal funds rate by 0.25% in late July, the first drop in more than a decade. While this slightly reduced short-term Treasury yields, it contributed to the demand for long-term bonds as investors anticipated declining interest rates. When interest rates fall, prices on existing bonds rise and yields decline. So the potential for further action by the Fed led investors to lock in long-term yields at current prices.8

Even if these technical factors are distorting the yield curve, the high demand for longer-term Treasuries represents a flight to safety — a shift of investment dollars into low-risk government securities — and a pessimistic economic outlook. One day after the initial two-year/10-year inversion, the yield on the 30-year Treasury bond fell below 2% for the first time. This suggests that investors see decades of low inflation and tepid growth.9

The flight to safety is being driven by many factors, including the U.S.-China trade war and a global economic slowdown. Five of the world's largest economies — Germany, Britain, Italy, Brazil, and Mexico — are at risk of a recession and others are struggling.10

Although the United States remains strong by comparison, there are concerns about weak business investment and a manufacturing slowdown, both weighed down by the uncertainty of the trade war and costs of the tariffs.11 Inflation has been persistently low since the last recession, generally staying below the 2% rate that the Fed considers optimal for economic growth. On the positive side, unemployment remains low and consumer spending continues to drive the economy, but it remains to be seen how long consumers can carry the economic weight.12

Regardless of further movement of the yield curve, there are likely to be market ups and downs for many other reasons in the coming months. Historically, the stock market has rallied in the period between an inversion and the beginning of a recession, so investors who overreacted lost out on potential gains.13 Of course, past performance does not guarantee future results. While economic indicators can be helpful, it's important to make investment decisions based on your own risk tolerance, financial goals, and time horizon.

U.S. Treasury securities are guaranteed by the federal government as to the timely payment of principal and interest. The principal value of Treasury securities fluctuates with market conditions. If not held to maturity, they could be worth more or less than the original amount paid. The return and principal value of stocks fluctuate with changes in market conditions. Shares, when sold, may be worth more or less than their original cost. The performance of an unmanaged index is not indicative of the performance of any specific security. Individuals cannot invest directly in any index.

Broadridge Investor Communication Solutions, Inc. does not provide investment, tax, legal, or retirement advice or recommendations. The information presented here is not specific to any individual's personal circumstances. To the extent that this material concerns tax matters, it is not intended or written to be used, and cannot be used, by a taxpayer for the purpose of avoiding penalties that may be imposed by law. Each taxpayer should seek independent advice from a tax professional based on his or her individual circumstances. These materials are provided for general information and educational purposes based upon publicly available information from sources believed to be reliable — we cannot assure the accuracy or completeness of these materials. The information in these materials may change at any time and without notice.